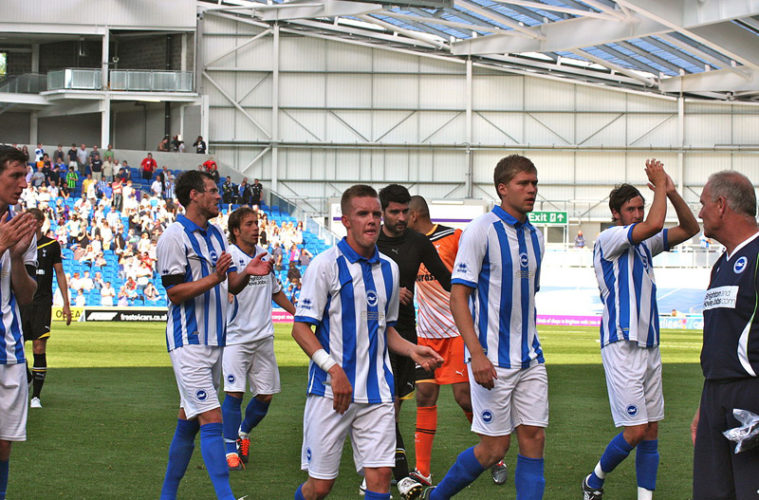 Brighton Stay on Course for Promotion With Win at Barnsley

Brighton & Hove Albion remain on course for promotion to the Premier League this season following a 2-0 victory at Barnsley on Saturday where they leapfrogged Newcastle into the top spot in the Championship standings – as the North East club were not in action.

After a tight 45 minutes at Oakwell, Sam Baldock broke the deadlock early into the second half when he beat Tykes ‘keeper Adam Davies with a half-volley. The Brighton striker doubled his tally for the afternoon not long after as he converted Anthony Knockaert’s pass to seal the points.

Seagulls goalkeeper David Stockdale was kept busy in the second half to keep Barnsley out and preserve his clean sheet, while the home side did have a strong penalty claim turned down in the opening half when Lewis Dunk looked to have handled the ball.

It was a good response from Chris Hughton’s men who bounced back well after dropping two points at the Amex Stadium earlier in the week in a 1-1 draw with Ipswich.

The Seagulls have lost just one of their last seven games in the Championship and can now be backed at 1/7 in the betting for Promotion, while in the outright market for the title, they are 15/8, with only Newcastle ahead of them at 8/15.

The first target Hughton – who celebrated his 100th game in charge of Brighton on Saturday – will have this season is to seal automatic promotion. The win against Barnsley takes them seven points clear of Huddersfield who are in third place, although the Yorkshire club do have a game in hand as they were in action in the FA Cup at the weekend where they held Manchester City to a goalless draw at the Kirklees Stadium. He will then set his eyes on winning this division for the first time in the club’s history.

Brighton will now be concentrating on a tough couple of fixtures as they face Reading at home next weekend and then three days later they entertain Newcastle in what could be a huge game when it comes to determining where the Championship title heads this season.

Reading had a good 3-2 victory over Brentford on Saturday which ensures they remain just eight points behind Brighton in fourth place. When the two sides met earlier in the season they played out a 2-2 draw in a very entertaining game.

Hughton will be hoping his side can then avenge their 2-0 defeat to Newcastle back in August. Baldock was sent off for a second yellow card in that game as Jamaal Lascelles and Jonjo Shelvey’s goals were enough to beat the Seagulls.

Brighton played in the first division between 1979 and 1983 in what is to date the greatest period of the club’s 115 year history as they also reached the FA Cup final in 1989 where they lost to Manchester United. A promotion this season will see them return to the top flight following a 34-year wait and would see them mark on their maiden campaign in the Premier League later this year.