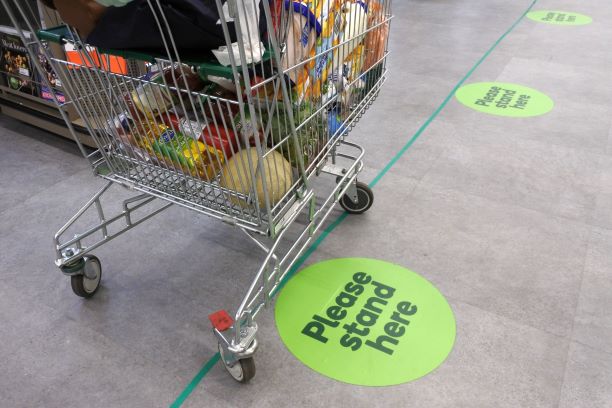 There’s chicken blood on the floor… Confusing markings too…Only a select few are
allowed in… A woman screams.

Okay, this isn’t a satanic ritual; this is retail.

Until 3 months ago, I had never worked in retail, assuming the term just referred to all
those boring jobs you do when you’re 16. But after returning home from travelling,
extremely broke, mid-pandemic, I needed a job ASAP.

The original plan of begging for my old bar job back didn’t exactly work out: within 10
minutes of me setting foot inside the pub, BoJo had appeared on the big screen
announcing this lockdown that we all know and love (?). So instead, I picked up this
temporary contract at a grocery store: maybe it was my time to shine in the retail industry.
Before I started my first shift, I saw a certain video of 2 customers physically fight over
toilet roll, and I wondered (a little scared) what this new role would entail…

Luckily, I hadn’t ended up at a big supermarket. They had the worst of the panic-buying:
tinned tomatoes were a distant memory; no fresh veg at all (other than corn on the cob…
But we’re not animals). At my store, things weren’t too bad. The biggest drama was a
mouthy customer insisting he needed 36 eggs during the period of the product limits. No
one needs 36 eggs in a pandemic… Was it a big omelette he was planning to cook, or
egging Downing Street? We’ll never know.

In my first week at the job I’d already had a few fuck ups: I was the slowest shelf stacker
Britain had seen, but it’s nice when the sandwiches line up. I had also been putting the
wrong magazine inserts in the newspapers, telling customers “yeah that paper just didn’t
send the magazines today” before realising my mistake an hour later.

By week three, I was coming to terms with the chaotic world of a ‘key worker’… I hadn’t
broken up any toilet roll fights (yet), but a lady had yelled ‘please fuck off’ at her (albeit,
quite annoying) 8 year old. I shrugged it off- it’s the Great British public, eh?

After one month of my Covid Contract, things in shops began to get back to normal. And
by ‘normal’, I mean there’s a bouncer at the door shouting, “one in one out” as a queue
forms down the street. I’m convinced he’s been telling stumbley older folk, “mate, go for a
kebab and try again later” out of sheer habit.

Things were getting easier for us shop staff as time went on; a handy one-way system
recently being implemented to supposedly stop customers from bumping into one
another. Of course, customers get confused, with many not understanding the concept of
an arrow. This has left me wondering how there aren’t more car crashes on the one-way
streets of Brighton. In reality, the ‘one in one out’ rule doesn’t work perfectly either, when
Helen’s having a 20-minute catch up with a neighbour down the meat aisle: “yeah, I had
to use the clippers on the dog. And then on the boys… It’s all getting quite out of hand”.

As the weeks in lockdown continue, I feel like I’ve seen it all: a bloody chicken carcass in
the middle of the shop floor; a colleague getting locked in the warehouse freezer… Having
shouts of “WHY DIDN’T YOU SAY YOU WERE IN THERE” projected into your ear through
a headset can be very distracting when serving customers, and attempting normal
composure is the grown-up version of having the giggles in class. It was around this time I
realised the real purpose of these walkie-talkie headsets was to have a chat. “That one is
sooooo nice” I replied to a colleague’s comment on a coffee brand via headset. The
customer at my till looked puzzled as he handed over his skimmed milk. The only time I
can really fault the headsets is when a button got stuck and we could all hear a manager’s
heavy breathing for 10 straight minutes.

I am now nearing the end of my Covid Contract, and still, I’ve cleared up considerably less
sick than as a bartender. Although that one spell of chunky 6-year-old vomit was much
more of a ball-ache than pure vodka sick… I have also been called a ‘dickhead’
significantly less times than in my previous role; the worst I’ve received here being a stern
telling off and insistence that I’m ‘not taking this pandemic seriously’. I shrugged in
response to this particular customer and continued to stand 2 metres away, behind a
perspex screen with my regularly changed gloves on… And took this bit of sass on the
chin, as most customers are actually… nice. At least 2-3 customers a week will look me in
the eye, deep into my soul, and thank me for risking my life so they can keep buying their
Strongbow. I’ve also felt pretty safe in this role as a ‘key worker’; the most discomfort
being when a customer sang his heart out to me as I scanned through his items.

But the end is in sight now. Lockdown restrictions are being lifted and the loo roll shelf is
always fully stocked. I’ve accepted I will never know anything about vape products, or
variations of pâté, and that is absolutely fine. I’ve come to appreciate aspects of the job,
particularly those older customers, who will wait for my till, so they can have their first and
only natter of the day.

Now at the end of my Covid contract, I am sad to see it go. It’s been boring at times, but
it’s made the weeks go quicker, and given me an escape from my boyfriend and my tiny
flat. So don’t feel too sorry for me slaving away, date-checking yoghurts; it has been a treat
to engage with the world as a ‘key worker’.