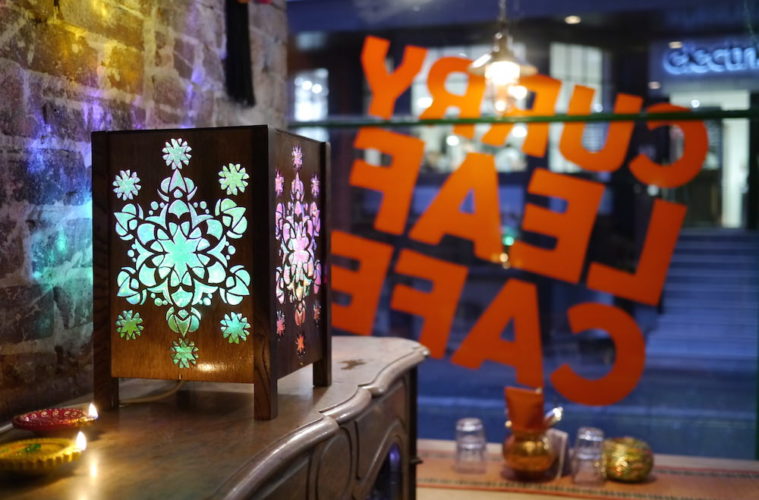 Great Indian restaurants are lacking in Brighton. Considering that the city has strong historical links to India, not least with the pavilion having served as a First World War hospital for Indian soldiers, this is a travesty. But we have had a surge of competition recently, with Chilli Pickle and Curry Leaf Cafe fighting it out for the title of best curry in Brighton.

From an installation in Temple Bar to a pop-up at Brighton station, Curry Leaf Cafe has been gaining quite a presence and a reputation across the city, so I’ve been intrigued to find out what it’s all about. This week, I finally got my chance.

The food is inspired by South Indian street food, and has the fragrant, pungent flavours that transport you to a market place in Kerala. The informal, colourful setting of the cafe’s main venue in Ship Street adds to the laid-back vibe, and you could easily be sharing beers with your friends in the Indian sun. Instead, you have to wander through the maze of The Lanes towards the sea to get there – not quite Hyderabad, but not a bad alternative, especially on a sunny summer day!

The menu is small, with only a few options which essentially come in starter or main course sizes. However, each dish is very different and offers you a broad experience of flavours. The drinks menu, on the other hand, is a hefty tome with a wide variety of excellent beers and wines.

Don’t rely too much on the menu’s own heat scale to guide you – I decided against chilli chicken for a starter because of the top three star heat rating, and it turned out to be fairly mild, whilst also being tasty, sticky and succulent. I opted instead for the Hyderabadi lamb boti kebab, which only had two heat stars and blew my tongue clean out of my mouth! The Mangalorean fish cutlets, on the other hand, also with two stars, were incredibly mild (although possibly everything just seemed mild after that lamb!), but provided a pleasantly surprising burst of sweet, rich spicy flavour.

In contrast to its starter equivalent, the Hyderabadi lamb main is far less hot and a thing of exquisite beauty – subtle spices underlined with a hit of mint and rich lamb. I know this because I had a small taste of a friend’s and then spent the rest of the meal grabbing little pieces to taste again at every opportunity. My own chicken dish, by contrast, Madurai kozhi kulambu, was the most bland and uninspiring of the main options. Basically, I got my chicken and lamb the wrong way around!

One thing that deserves mention, which is so often overlooked in Indian restaurants, is the accompaniments. I have eaten in so many restaurants where the poppadoms and chutneys are flavourless, murky things, banged down on the table just to make up the numbers. At Curry Leaf Cafe, you are presented with a selection of gourmet crisp-style poppadoms, dips full of warm, sweet flavours, and a peanut salsa that is incredibly moreish! Likewise the naan breads, so often neglected and unloved chewy cardboard in other restaurants, were light, fluffy and just crispy enough around the edges. They also come in a wide variety of flavour combinations.

Possibly my favourite experience in India was travelling through the Thar desert on a camel. Not the riding the camel part so much – that was seriously uncomfortable – but in the evenings we set up camp and the guide taught me how to make flatbreads on the fire. We sat under the stars, ate incredible vegetable curry, and talked into the night. The food in India is at its best when it is kept simple and concentrated on a few key flavours. Curry Leaf Cafe has embraced that simplicity and focus, and the flavours shine through because of that.

The one thing that really detracted from the meal was the customer service. Despite pre-ordering our food, we waited 45 minutes for our starter. The air conditioning was on full blast when we arrived – they kindly turned it off for us when we asked, but then turned it back on 10 minutes later. We were there in a group of 15 (hence the pre-ordering) celebrating a friend’s birthday – we weren’t particularly raucous, speaking up only to be heard over the music and general noise, but were told repeatedly that we were too loud and needed to quieten down.

All in all, however, the food was lovely. Just don’t go in a large group, don’t go too regularly or you’ll tire of the limited options very quickly, and, whatever you do, order chicken then lamb, never the other way around!