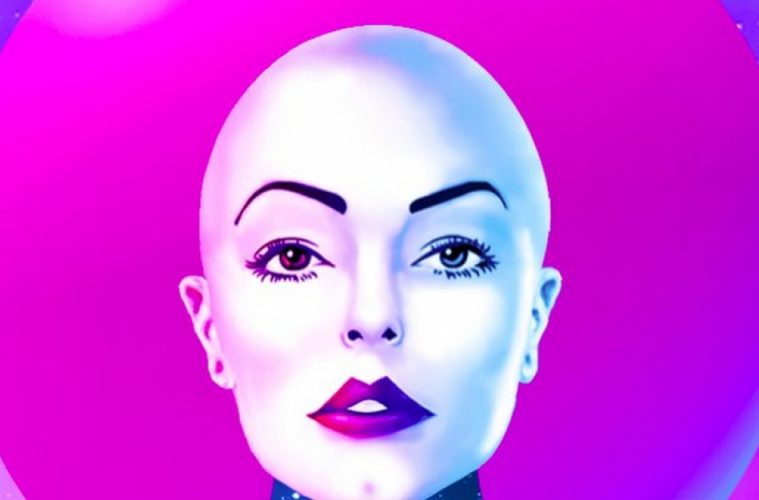 Rose McGown brings her Planet 9 show to the Komedia, Brighton on 30th September with Funzing. Chloe Price caught up with her to discuss how the show went down in Edinburgh and about how things were going.

Rose McGowan was born in Tuscany, Italy to American parents as her father ran an Italian chapter of the sex cult Children of God, travelling Europe and becoming a child model for Vogue. She moved to the USA at the age of ten, became a teenage runaway and emancipated herself from her parents at the age of 15 to move to Los Angeles to become an actress. At 22 she got her plaudits for her leading role in The Doom Generation and made her name in the cult film Scream. Critics highlight her star turn Robert Rodriguez’s Planet Terror as her career-best.

Despite decades in the film industry, she is forever associated with a different role as a leading lady. Now 46 years old, Rose McGowan has inspired men and women to speak out against sexual abuse through her roles in the Me Too movement and the Harvey Weinstein case. In October 2017, actress and activist, McGowan, was one of the first people to speak out about the abuse she was victim to by Harvey Weinstein. Since then she appeared in a four-part documentary series, following her role in the #metoo movement. McGowan’s work has touched the hearts of people from around the globe and encouraged them to speak out and refuse to be silent.

Earlier this year, McGowan performed her spoken-word piece, Planet 9, at the Edinburgh Fringe festival. The show brings transformative vibrational energy and combines film, music, and live performance bringing calm. Planet 9 is actually a place Rose invented as a child as a coping mechanism, and those that have read her Brave autobiography or know the background of her life it is easy to see why. The show is an invitation to join her on a  healing journey of discovery to this new planet and to take a little piece with you.
McGowan not only talks about the importance of men speaking out about abuse as well as women, but she also mentions the gender pay gap for women of colour. In this piece, McGowan reminds us of the inequalities we face today and encourages us to make a change through an empowering social movement.
Prior to Rose taking Planet 9 in Brighton and London, we met her to ask some questions.

Your piece, Planet 9, performed at the Edinburgh Fringe, took on an out of this world approach. What was the inspiration behind this?

I love the idea of creating worlds beyond worlds. I’ve been working on the Planet 9 project for 4 years. My inspiration is simply wanting to create a visual/sound art project that makes people feel like they’ve gone to a newer, better place.

How do you think the element of the spoken word differs from a speech in terms of its impact? Do the echoes and the music play a part in drawing the attention of the audience?

Spoken word is something that can be so moving and profound. Speeches have impact, but art takes you to another level.

I did enjoy the experience very much. When I start working on a new album, more spoken word pieces will probably come out. I love using words to express myself.

The Me Too movement encourages people to speak out, how would you recommend others to speak out? Would you encourage everyone to speak out and capture the public eye to the extent that you did?

I do encourage people to speak out when it feels safe for them. Speaking out is not easy, you have to prepare for battle. It takes strength to discuss openly, but the feeling of freedom is worth it to me. Everyone has to decide for themselves, but the more voices are raised the more change we’ll see.

Do you ever think that you’ll feel complete with your work? Is there a finish line?

I’ve had to say it’s finished to do the show, but it never really feels finished because you can always keep tinkering.

Do you have a new project on the horizon? Could you tell us more about your plans for the future?

For now I’m working on getting Planet 9 into the world. I’m also developing a film to direct and thinking about doing a podcast! The future is both scary and exciting.