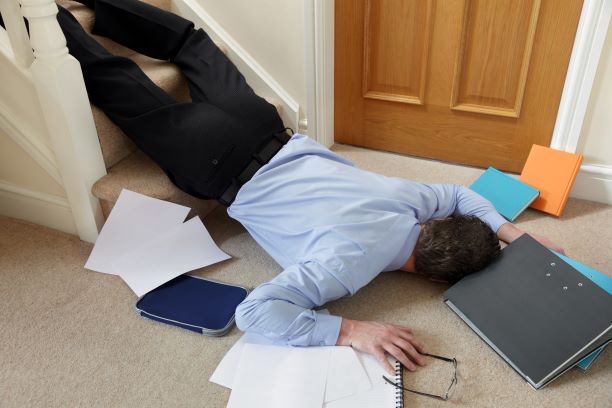 What’s the most dangerous room in your house?

What is the most dangerous room in your house? You may not consider the rooms in your house to be particularly dangerous, but studies have revealed that there is one room in particular in which people injure themselves more than in others: the bathroom.

The New York Times found that many accidents occur while people are taking a bath or a shower. Over a third of injuries in the bathroom happen this way, according to the statistics. The article quotes a study by the Center for Disease Control and Prevention which states that approximately 235,000 teenagers and adults over the age of 15 have to seek help at an emergency room after injuring themselves in the bathroom. About 14 % are even hospitalized.

Is working from home unsafe?

Accidents in the home can even happen while simply typing on a laptop. A new study showed that working from home can also be risky. The goal of the survey by National Accident Helpline was to find out if working in a home office poses serious risks to employees. The results are especially relevant in 2021, since many people are now working from home because of the effects caused by the pandemic.

Almost half of the people working from home injure themselves

1000 people in the UK participated in the study and shared the experiences they had while working from home. All of them had been working in a home office since March 2020. The study showed alarming results: 48% of participants had suffered an injury during this time. With almost half of those who joined the study having injured themselves it is clear that more needs to be done when it comes to keeping employees safe.

It’s important that people who aren’t used to working from home get good advice on how to safely set up their office space. The NAH warns that “A fifth of workers (20%) have received no health and safety guidance from their employer on the suitability of their home workstation.” However, some have also ignored the advice they were given by their employer (23%).

Does this mean that working from home has created a worse situation?

So, has working from home made things better or worse for us? Are we more at risk of injuries? We may be able to prevent injuries by following safety advice and setting up desks and office chairs in the right way. By not forgetting to be careful, even in our homes, we can avoid unnecessary accidents.