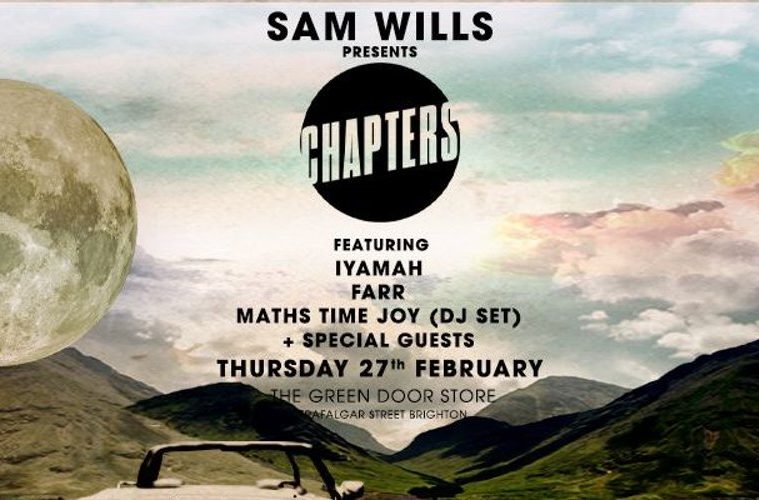 After several sold-out headline shows at London Lexington, Sam Wills brings yet another show to The Green Door Store in Brighton, late this February. His monthly night, Chapters, is a live event featuring Sam and his house band, as well as a series of special guests, such as Iyamah, Farr and Maths Time Joy. Sam curated these monthly events with the aim to make each night unique as he discards any rigid order and strongly focuses on his improvisation skills. This, Sam claims, makes the nights more free as it allows for his creative juices to run wild. It’s because of this that each night is different, making them all memorable events.

Eastbourne born Sam Wills is rapidly becoming one of the hot new artists for soul and r&b. The multi-instrumentalist, producer and classically trained vocalist burst onto the scene in 2016 with ‘In the Midst of it All’ which was featured on Tom Misch’s Beat Tape 2, which has hit over 17.7 million streams so far and has become number one of the Hype Machine.

Since then, Sam has won the praise of Radio 1 DJ’s Zane Lowe and Annie Mac and has opened for a number of acts such as Jordan Rakei, Jess Glynne, Bruno Major and Tom Misch. But Sam’s talents don’t stop there as he has co-produced Jorja Smith’s globally-acclaimed single ‘Where Did I Go?’ which has hit 41.7 million streams to date. On top of that, he’s helped write and produce tracks with Cadenza, Cosmos Midnight, Disclosure, Moods, Dolapo, Zach Said, Jarreau Vandal and Iyamah.

With over 130,000 monthly listeners, Sam’s latest release Talk in the Morning has already reached over 285,000 streams, with more releases to come.

We caught up with Sam to find out more about him and his upcoming event, Chapters:

• What have you learnt/what skills have you gained from your experience with Tom Misch, Jorja Smith, Jordan Rakei and Joe Hertz?

I think all of my collaborations have taught me something. Mainly different approaches to writing and production. Also how the vibe in the room is one of the most important aspects of being a songwriter – if the vibes are good it makes it a lot easier to open up and be creative.

• How did the opportunity to get signed to Entertainment One come about?

The team at eOne reached out last year, and after a while of staying in contact it felt like the right place for me, and the right time.

• The Chapters events are launching properly in Feb 2020, where did it start? What made you want to run an event that was partially organised and partially improvised?

I’ve always loved jamming, the spontaneity of it, not quite knowing what’s going to happen, and when it goes right it feels so rewarding. But as an artist, playing live shows don’t leave much room for improvisation most of the time, as it tends to be a well-rehearsed, repeated set. I thought it would be amazing to have a platform where it’s free from those normal constraints, and get to jam with other artists, with their music as a starting point and something to ground the night and keep it moving. The idea of taking a song and leaving it open to interpretation in the moment is exciting! It also means each performance is completely unique.

• Before you get on stage, what emotions do you feel? How would you describe how you feel before, during and after you perform?

Depends what the gig is! Most of the time I don’t get too nervous and am mainly excited and focused. But there’s the odd show, if it’s particularly important or a much bigger crowd than I’m used to, where I get nervous just before, I tend to feel cold and can’t keep still. If the first half of the first song goes well I tend to completely relax during a performance. If I feel like I’m struggling then the nerves remain throughout! That’s quite rare though luckily! Afterwards is usually a mix of an adrenaline high and relief.

• Your next single will be released early next month, with more releases over the next few months, what can we expect?

I feel like over the past year or so I’ve modified and refined my ‘sound’. The next song is slightly different from my previously released style I would say, which is refreshing. And without giving too much away, there’s plenty of music on the way!

• Who influenced you to produce the work you are currently producing?

• What has been the highlight of your career so far?

That’s a tricky one! But probably my sold out headline show in London last year. Or signing my first deal, or touring North America/Canada with Jordan Rakei.