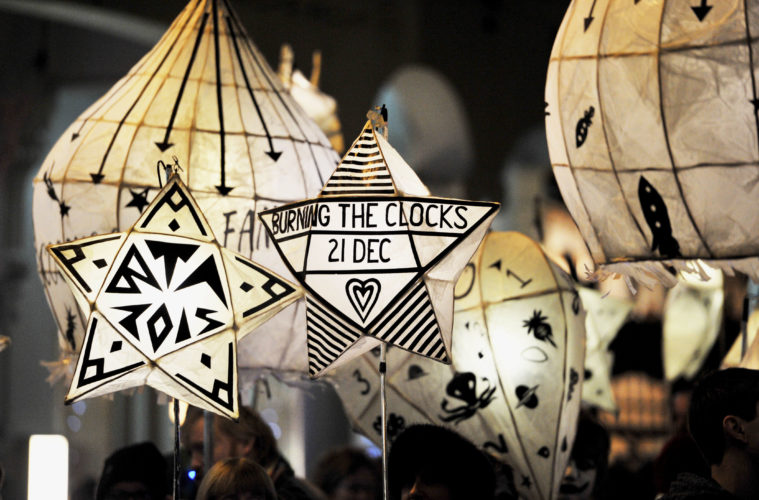 What’s hotter than the Chilli Pickle? A ticket to this year’s official after party for Burning the Clocks

Brighton-based Indian restaurant The Chilli Pickle today announce their support of local event Burning the Clocks as the official restaurant partner for 2016. Their sponsorship will support this year’s event and help promote the official after-party (the event’s existence relies on community support and public donations on the night).

To mark their support and to launch ticket sales for Burning the Clocks’ official after party, a five by two metre mobile comet ‘Harbinger’ last night delivered lanterns to The Chilli Pickle.

Dawn Sperring, co-owner of The Chilli Pickle, said: “We’re delighted to be the official restaurant partner for Burning the Clocks 2016 and can’t wait to be a part of their first ever after party. With over 20,000 people expected for the annual Burning the Clocks event but only 200 tickets available for the official after party, these tickets are likely to sell fast.”

Juice 107.2 are also supporting this year’s event and have 100 early bird after party tickets, available at £5, using code word JUICE, for more information keep an eye on the Same Sky website. All ticket income from the sale of after party tickets will help Same Sky fund Burning the Clocks.

Guy Lloyd drive time presenter at Juice 107.2, added: “An after party is just what Burning the Clocks has been missing. Join us at Patterns after the fireworks, to mark the end of the parade with a warm drink, some great music and a little bit of Same Sky magic.”

Taking place from 6.30pm on Monday 21 December 2015 from New Road, the Burning the Clocks parade runs from the Brighton Dome to the seafront, features around 2,000 participants and attracts more than 20,000 onlookers.

For more information on Burning the Clocks 2016 visit – www.facebook.com/SameSkyBtn/. To make a donation via the event’s online crowdfunder visit – www.crowdfunder.co.uk/burning-the-clocks.

Same Sky produces Burning the Clocks, the Brighton Festival Children’s Parade and many other events in Brighton and Hove. Same Sky was set up in 1987 and creates imaginative events and workshops to strengthen communities, inspire individuals and brighten people’s lives.

Their work engages directly with the community to produce a wide range of events, combining the visual and performing arts. They act as a resource for schools and other community groups supplying information and specialist advice and a programme of master-classes, training courses and residencies. They have a proven track record in producing site specific events and installations, permanent and temporary public art.

About Burning the Clocks

Burning the Clocks first began in 1993. The event is an uplifting antidote to the excesses of a commercial Christmas. People bring the paper and willow lanterns that they’ve made to parade through the city before passing them into a huge bonfire on Brighton beach. Each lantern maker becomes a part of the show as they invest the lanterns with their wishes, hopes, and fears and then pass them into the fire.