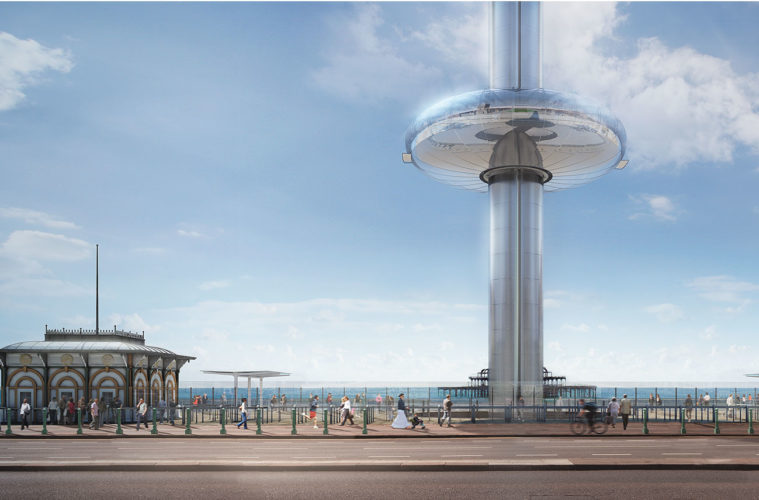 It has now been roughly six weeks since British Airways launched the locally controversial i360 viewing platform  and already those six weeks have seen the pod break down twice, causing British Airways to close the attraction whilst checks were carried out.

On September 8, 2016 a mechanical error left one hundred and eighty passengers stranded halfway up the the observation tower shaft for more than two hours.  The passengers, including one heavily-pregnant woman Amy Hyatt, were part of a private party there to, ironically, celebrate the 1360’s opening.

Tim Jones, party organiser, had the following to say:

“BA have learnt a hard lesson about interacting with customers this evening, Only two interactions were made over the two hours and they kept pretty quiet about the free bar and the emergency toilet until we were nearly on the ground.

“We fully support the i360 and think it is a great venture for the city, so we hope they can find out what went wrong and take it from there. It’s certainly given us something to talk about for the rest of the evening.”

Yet trouble would plague the i360 only a few days later when, on September 11, 2016, the pod trapped approximately two hundred people for more than an hour after an error occurred with the door sensors.

British Airways’ i360 chairman David Marks released a statement on their website following these events:

“On Thursday September 8, the British Airways i360 pod stopped because of a load imbalance. Investigations reveal that the load and balance system settings were too low, which meant the system was over-sensitive. When the pod was near full capacity this triggered the default safety mode and the brakes were automatically applied.”

“To mitigate this, we operated to a lower capacity until we were able to adjust the settings and upgrade the software. This was done yesterday [September 12]. This evening, technicians will check the new load levels and test the settings to ensure the pod is now operating to the weight and balance levels for which it was designed.”

“On Sunday September 11, one of the sensors around the pod docking stations at boarding level gave a false reading to the control system, which again put the pod into safety mode by activating the brakes. All the sensors have now been checked and adjusted where required, and will be monitored regularly.”

“We have a highly qualified engineering team on site during all operating hours and we are confident that these same issues will not happen again.”

“We are running final checks tonight and will announce in the morning our plans for reopening.”

“We would like to assure our customers that their safety and comfort is our number one priority and apologise again for any inconvenience caused.”