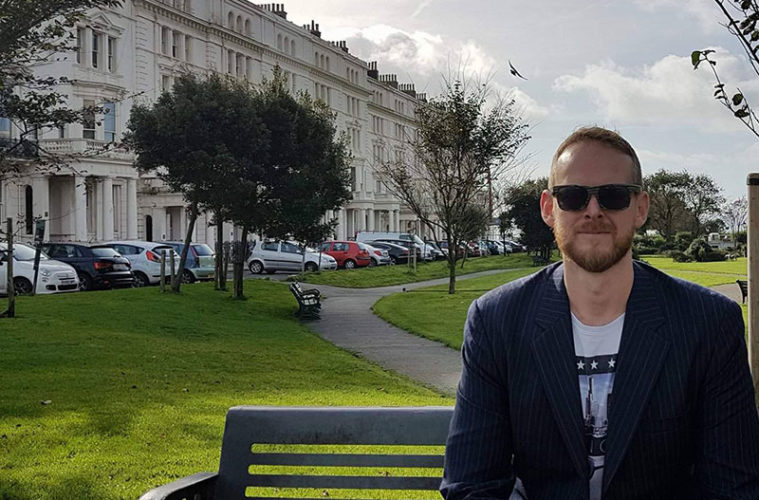 Luke Cairns is the man behind Hightower Video, a Brighton / London video production company that offer cutting edge video production with clients such as SanDisk, Santander, Tesco and Hitachi. We’ve heard great things about Hightower and were delighted to get to catch up with Luke to find out just what it takes to become a video producer.

How did you become a video producer?

I always thought I’d end up in the filmmaking industry, I was just never sure exactly how things would pan out.

My obsession with film making started when my mum took me to Universal Studios in California when I was 6. Everything about California is intense and supersized, as a 6 year old the whole experience was a revelation. In Universal I was particularly impressed by the Alfred Hitchcock building, which recreated scenes of his various films – Dial M for Murder, Psycho, North by Northwest etc. What particularly took me was a room which listed all of Hitch’s films in a freeze along the top of the walls. Hitchcock made approx 50 films – which blew my mind then and now!

After this I was a committed cinephile and decided to study my degree in film at University of Wales, Aberystwyth. I loved university, but found a lot of the course was to theoretical, it only got really practical in the third year. Fortunately I’d got hold of a DV camera by this point and was filming stuff whatever I could when I was out of lectures. This thankfully changed in my third year and I got hold of some decent tech and was shown the fundamentals of editing.

After graduating I worked on set and in house for various film producers including Norma Heyman, the producer of Dangerous Liaisons, Buster and Mrs Henderson Presents, among others. I also worked in various post production houses in Soho, but found working as a runner pretty soul destroying. I took a few years away from the industry and lived and worked in Marbella before the credit crunch.

The credit crunch pretty much killed it for me in Spain, so I returned and rediscovered my love of film by producing music videos for local artists. The progression from this was to set up a company specialising in branded content, corporate video and TV adverts. Over the last decade I have worked with brands like SanDisk, Hitachi, Santander and Tesco and have produced TV adverts which have been broadcast on every major TV channel.

It is a terrific time to be a video producer because technology is moving so fast and companies are waking up to the realisation that video content is vital in their marketing mix. Content is king and the best way to show off your company is in about 2 minutes of lush video! The content itself keeps improving too with technological advancements and it’s thrilling to keep pushing the envelope for commercial film making.

What does your current role involve?

My role comes in two parts – I am a video content producer and editor.

One of the questions I get most often is “what does a producer do..?” It is fairly easy to pigeonhole most roles within production – everyone knows what a director does and a sound recordist, Make up artist and set designer. The role of producer is more opaque – the common conception of a Hollywood producer seems to the person who sits around set with a big cigar bossing people around.

The reality is much more mundane of course. The producer is like the “parent” of any production. In the world of TV ads and web video, producers will be the person who deals with the client and has won the business in the first place. The producer’s job is then to work with a creative director and script writer to decide on a concept and script for advert. The producer will then work with the budget they’ve been given to gather together the best team of freelance professionals available (or work with their in house team). Every element of the production needs to be tightly budgeted – studio filming, editing time, music and dozens of other variables depending on the concept.

The producer will be omnipresent through the whole production process, generally being point person between the client and the crew. This can be one of the most challenging parts of being a producer, the client, of course, is the boss but it’s important to keep the crew happy and motivated.

As well as my producing duties I’m also an editor, cutting with Adobe Premiere. This allows me the chance to flex my creative muscles occasionally and get stuck in. I find editing a very rewarding experience, it usually starts off scarily, but once you have a decent steer on the footage you have – seeing a video emerge from a load of disparate rushes is great!

In business, I think one of the most important things is to get your management style right. There’s a good quote from Richard Branson – “Clients do not come first. Employees come first. If you take care of your employees, they will take care of the clients.”

Having worked as a marketing manager as well as a producer of TV ads and online video content I know this to be 100% accurate. There are so many bad managers, managers who crack the whip and expect to be respected. That will *never* work, in my opinion, respect is earned and it’s vital to lead from the front if you are managing people. Show your team that you understand what you’re asking them to do and can do it yourself if need be.

I always try to lead in this way, treating my team with the respect that I’d expect if they were in my position. Another good analogy is – “you attract more bees with honey than vinegar”. I’ve seen people in the sales world, as well as production spend all day yelling at their charges – all that ever can come from that is resentment and negativity. It sounds so obvious, but it’s only when you’re in a management position that you realise how important people skills are. Managing people is really tough, so it is essential to have everyone on side and going in the right direction.