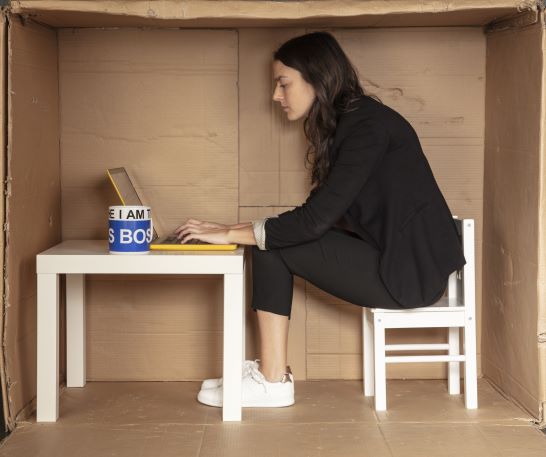 An Ode to a Crackden

I live in a tiny bedsit with my boyfriend. It is the smallest crappiest “flat” you can find in the city of Brighton and Hove. So questionable as a “living space” that it has been nicknamed The Crackden. But it is our Crackden.

I sit upon the baked bean stained futon, quarantined in this little space. I gaze at my boyfriend in his pyjama bottoms with the crotch ripped out (not for sexual purposes might I add); I see the crumbs on the floor; the wardrobe made from poles and fabric…. I realise I love the Crackden in some alternative Stockholm syndrome way where the captive falls in love with the cave in which she is stuck. It is a shithole, but it’s our shithole.

On the top floor of a beautiful Georgian building, this is no penthouse suite. There is a mountainous hike to the flat: 4 stories: 72 steps in total, and there is obviously no lift. The high ceilings of the hallway make the flat itself seem quite grand, but it is more of an attic room: an afterthought to the real flats below.

I have never met our neighbours, but I know their names from the piles of post that lay untouched, or opened and discarded: letters from the bank; a political manifesto from the 2017 election; pizza vouchers… On a late night trip to the outhouse (the bathroom is shared… I would consider this an outhouse) I heard our neighbour exclaim, “I will fuck your mother, and then I will fuck your sister”. I am hoping this was an overzealous xbox threat, and not a quarantine rule-breaker. It still beats the previous tenant who listened to Russian tech-house at 6am each morning. He also smoked in the outhouse, which by the way, doesn’t have a window.

On the trek up to the flat, you pass alcoves in the walls, each of which possesses a cuddly toy. The toys appeared a few weeks ago, and range from an emoji pillow to a dog in a firefighter’s hat. It adds a small amount of charm when you’re out of breath on step 37.

Floor number two is the most interesting, with a pile of discarded stuff congregated on the landing. In the past year the pile has grown from a few old jumpers to a colossal mass of crap. There are tea towels; a cactus; a box of pebbles; bags of old clothes. Today a new item appeared: a bin bag of vegetable peelings. I try not to judge others’ quarantine routines, but it does make me wonder what stops them from taking these items to the bin. I hope the vegetable peelings are not here to stay.

Finally, 4 flights up (I will be panting hard at this point), the Crackden appears in all her glory.

The walls of the Crackden could be considered art. But not in a Sistine Chapel scenario, more like a modern take on the housing market. The paint is peeling off the walls and around 50 ticket stubs have been blue-tacked up over some concerning looking cracks. The gig tickets make the room seem like an excitable tween’s bedroom. *Some* say these decorations are edgy. I do not. There is also a football tea towel pinned up, that I’ve been told is a *nice wall hanging*. It isn’t.

There was a horrible red rug in the middle of the room, until last week where it found a new home in the bin. In fact there’s a lot of horrible red things due to my boyfriend’s taste in decoration before I came along: Liverpool FC scarfs pinned to the walls, being just one of these things. Well, 5 actually.

There were three printers in this 7m x 7m flat, but we’ve got it down to two now… one of which works some of the time, the other absolutely none of the time (angrily discarded on top of the fridge…) The good printer sits under a lifetime of books on the carpeted floor (which by the way, is always dirty, despite hoovering three times this week. How does that even happen? It seems that the horrible red rug collected most of the crumbs and paperclips and bits of hair which now lay on the naked carpet).

Sat inside staring at the walls for 24 hours a day, I begin to notice every cold breeze through the single glazed windows; what seems to be a dinner party every night from the couple downstairs (are they social distancing? Or are there 10 living under one roof?). I start to really think about to recycling bin (a bin bag tied to the cupboard door filled almost completely with reduced Easter egg packaging). This is my home: I’m living in the real Brighton: a part of this creative city…

The next morning I am up early and cranky from a broken night of sleep: an argument over the good pillow left me defeated, and my back in permanent achiness from a dip in the bed. I sip my instant coffee and look out at the view, and smile: there is some magic to the flat. From the window, the views of the west pier at sunrise are straight from an Iphone screensaver. I’ll sit in the bay windows for the rest of the day, scowling at my boyfriend on a loud Zoom call; me trying to write but mostly people-watching: Are they… swimming?… PADDLE BOARDING?!

I did not expect this lockdown. I mean no one predicted a pandemic and house confinement, other than the Simpsons and maybe that magical squid. With more planning I would have moved myself back to my parents’ spacious house, but here I am in The Crackden, until it is all over.